Nominate a Colleague or Mentor for an Award!

The nomination should be uploaded by December 15, 2021 with the following form of the IUPAC Secretariat : https://www.cognitoforms.com/IUPAC1/IUPACRichterPrize2022NominationForm

The Philippine Federation of Chemistry Societies, Inc., with the hope of contributing to a greater public interest and appreciation of chemistry, particularly among the youth, organised the inaugural PFCS Photo Contest with the theme, “Chemistry in the Eyes of the Youth.”

The contest was open to Grades 7-12 students from both public and private schools nationwide. We received entries from students of different grade levels coming from all over the Philippines. They were judged based on creative expression and originality (30%), composition and technique (30%), and relevance to the theme (40%).

This year’s winning entries are as follows:

Innocent Chemist
We are chemists, we extracted flowers and leaves that we picked every time we play “bahay-bahayan” to make different colors, we are, unknowingly, engaging ourselves in chemistry. We have learned to make our own experiments and discover reactions in the nature because of our childhood.

Burn it Up
Patterns of fire created by the combustion reaction of gas from a gas stove burner.

Unbelievabubble
A soap bubble consists of a thin sheet of water between two layers of soap molecules, encapsulating a gas. The hydrophilic head of each soap molecule faces the water, while the hydrophobic hydrocarbon tail extends away from water. The increased distance between water molecules causes a decrease in surface tension.

The other participants in the PFCS Photo Contest 2021 are as follows:

The Philippines bagged two silver and one bronze medals from the recently concluded 53rd International Chemistry Olympiad (IChO), held last 25 July to 2 August 2021 hosted by Japan. This edition of the IChO, the second one to be organized remotely due to the COVID-19 pandemic, gathered more than 300 participants from a record 85 countries and regions.

Comprising this year’s Team Philippines to the 53rd IChO were:

The team was passionately trained for two weeks by a coaching staff composed of highly-skilled chemistry professors. The coaching team are comprised of the following:

Guest coach: Mr. Michael Tantoco – last year’s Silver medalist also spent a few sessions with the delegates to give them problem solving strategies for the exam.

In its interactive virtual opening ceremony last July 25, participants transformed into their online avatar counterparts which was much appreciated given the current circumstances. They were all warmly welcomed by Dr. Kohei Tamao, president and chairman of the 53rd IChO Organizing Committee.

The examination proper of the competition was held last July 28. Contestants from around the world answered nine challenging problems for five hours in the comfort of their own homes with their respective parents or guardians serving as invigilators that monitored their conduct. Of course, it was not all serious work for the delegates. The organizers made sure that despite being a purely virtual event, videos and virtual tours promoting Japan’s Kansai region, where the in-person competition should have been held, were shared much to the delight of the participants.

In its virtual closing ceremony held last August 2, the 53rd IChO organizing committee awarded medals and citations to the winners. Mr. Ariston and Mr. Gelacio each obtained a silver medal, while Mr. Morales clinched a bronze; this is the Philippines’s best medal haul yet from the IChO. At the conclusion of the closing ceremony, Japan handed over the IChO flag to China, the host country of the next IChO in 2022.

First held in 1968, the IChO is the most prestigious annual competition in chemistry for high school students. It aims to generate student interest in chemistry through solving of creative yet challenging problems and to promote international friendship, scientific cooperation, and pedagogical exchange among delegates. Team Philippines’ participation was made possible by the sponsorship of ICP UNILAB chapter in partnership with the Philippine Federation of Chemistry Societies (PFCS) through the efforts of Mr. Arjay C. Cubos, President of the ICP-UNILAB Cluster. The Philippines first sent competing delegates to the IChO in 2017; to date, it has proudly amassed four silver and nine bronze medals, and one honorable mention citation.

The Professional Regulation Commission (PRC), through a resolution, has announced that the 2020 Chemist and Chemical Technician Licensure Examinations are among those board examinations in October that will NOT push through.

For inquiries and concerns, please email the PRC’s Licensure Division at licensure.office@prc.gov.ph and licensure.division@prc.gov.ph.

Please be guided accordingly. Thank you.

Team Philippines 2020 took home one silver and three bronze medals in this year’s 52nd International Chemistry Olympiad (IChO). This is the Philippines’s best performance in the IChO since the country’s initial participation in 2017.

The 2020 IChO was hosted and organized by The Scientific and Technological Research Council of Turkey and was held on July 23-29, 2020. Originally planned to be held in Istanbul and attended by 235 students from 60 countries, this edition of the IChO was conducted online instead, for the first time because of the COVID-19 pandemic.

The parents of the four students also played a major role in the competition by serving as the invigilators while the students are taking the examination inside their homes. This was the first time that this has happened in the 52 year history of IChO.

The competing team was assembled from the contestants who got the highest scores at the Philippine National Chemistry Olympiad (PNCO) held last February 1, 2020. The 2020 PNCO was hosted by the College of Science of the Pamantasan ng Lungsod ng Maynila (PLM) under the leadership of Prof. Jennifer Sy (PLM) and PNCO convenor Dr. Eric Punzalan (DLSU).

First held in 1968, the IChO is most prestigious annual competition in chemistry for high school students. The IChO aims to stimulate student interest in chemistry through the solving of creative yet challenging chemical problems, promote international contacts in chemistry, friendships among young scientists of different nationalities, cooperation among students, and exchange of pedagogical and scientific experience in chemistry. Team Philippines’ participation was made possible by the Philippine Federation of Chemistry Societies (PFCS). The Philippines first sent its competing delegation to join the competition in 2017 where it initially took home two bronze medals.

The Philippine team which competed in the 51st International Chemistry Olympiad held in Paris last July 21 to 30 returns with a Silver, a Bronze and an Honorable Mention Certificate.

The four students earned the privilege to represent the Philippines after emerging as the top four competitors in the 2019 Philippine National Chemistry Olympiad(PNCO) National Finals held last January 2019. The PNCO is conducted annually under the auspices of the Philippine Federation of Chemistry Socities, Inc., particularly by the Kapisanang Kimika ng Pilipinas, Inc. (KKP) and the Philippine Association of Chemistry Teachers, Inc. (PACT).
First held in Czechoslovakia in 1968, the International Chemistry Olympiad (IChO) is an annual competition where a team of up to four high school students per nation may compete in various topics including analytical chemistry, organic chemistry, physical chemistry, inorganic chemistry, biochemistry, and spectroscopy.
The 51st IChO featured 390 students from 80 countries.

Represented by Philippine Science High School (PSHS) students, Israel Aguba, Arthur Rainer de Belen, Julius Macling and Michael Cole Tantoco, the Philippines competed with over 300 students from 79 countries and displayed its prowess in chemistry both in the theoretical and practical examinations. This year, de Belen and Aguba successfully collected the silver and bronze medals, respectively.

According to Dr. Jose Andaya, PSHS Cabarzon Campus Director, and Mr. Julius Victorius Saluria, Teacher Coach from the PSHS Main Campus Chemistry Department, this is the highest performance the Philippines ever had in the competition. It may be noted that the Philippines won the bronze medals in the 49th and 50th ICHO in 2017 and 2018.

ICHO is an annual competition for the world’s most talented chemistry students at the secondary school level. It aims to stimulate student interest in chemistry through solving of independent and creative chemical problems and promote international contacts in chemistry, friendships between young scientific workers of different nationalities, cooperation among pupils, and exchange of pedagogical and scientific experience in chemistry.

This article appeared originally at the Embassy of the Philippines – Paris, France.

The Philippine Federation of Chemistry Societies recognizes outstanding contributions to Chemistry through the PFCS Awards. The awards aim to:

The PFCS AWARDS will be given under four categories:

Separate awards will be given for chemistry educators at the secondary and tertiary levels. Thus, nominations are invited from high school and college level chemistry teachers. The criteria for the nominee in each level are:

IV. Service to the Chemistry Profession This is a special award to recognize individuals (not necessarily chemists) who have made outstanding contributions to the upliftment of chemistry in the Philippines through leadership advocacy and exemplary work. 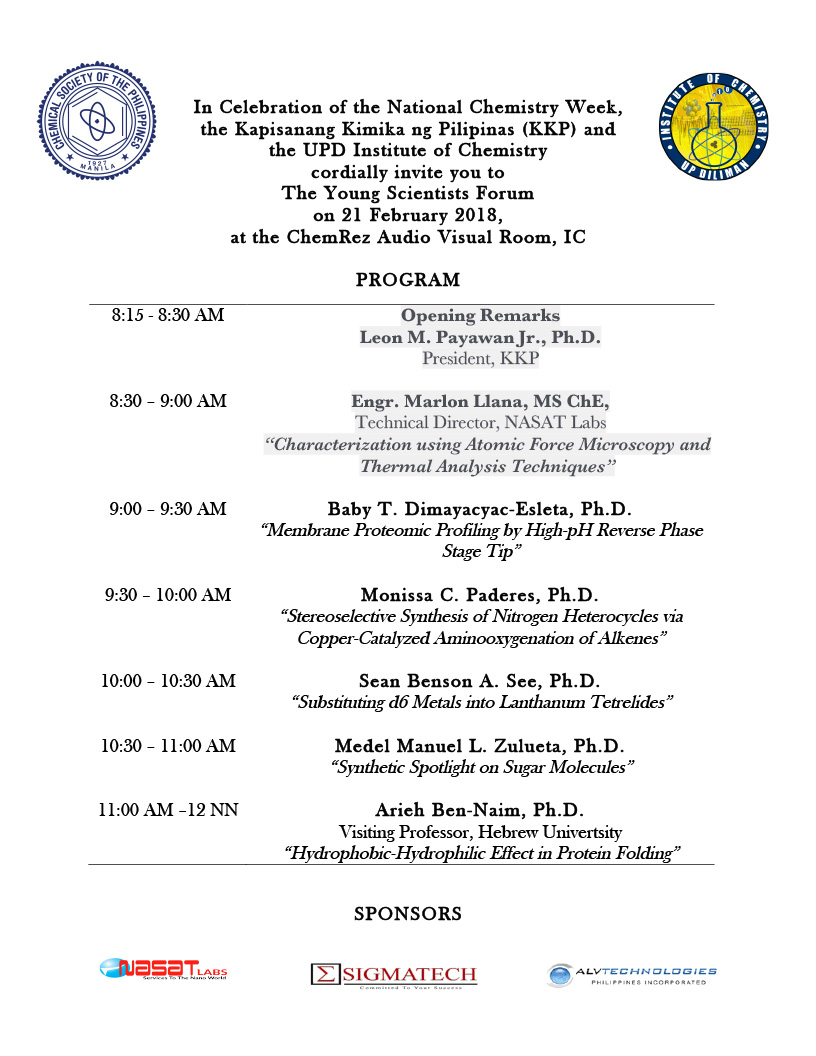 The Philippine Federation of Chemistry Societies recognizes outstanding contributions to Chemistry through the PFCS Awards. The awards aim to:

The PFCS AWARDS will be given under four categories:

Chemistry Education
Separate awards will be given for chemistry educators at the secondary and tertiary levels. Thus, nominations are invited from high school and college level chemistry teachers. The criteria for the nominee in each level are:

Service to the Chemistry Profession
This is a special award to recognize individuals (not necessarily chemists) who have made outstanding contributions to the upliftment of chemistry in the Philippines through leadership advocacy and exemplary work.