This year’s 320 new chemists who passed the recently concluded licensure examination had their oath-taking last October 11 at the Fiesta Pavilion of Manila Hotel. Several companies, such as San Miguel, set up application booths wherein the successful examinees could submit their resumes, jumpstarting their careers in the promising world of chemistry.

Dr. Lilibeth Coo hosted the program, which started off with the entrance of the top examinees that obtained the ten highest scores in the exam. Following them were the officers of the Integrated Chemists of the Philippines (ICP) and the distinguished guest-of-honor, General Liza Sabong, PNP Chief Superintendent and President of the PNP cluster of ICP.

Hon. Adoracion P. Resurrection, chairman of the board of chemistry gave the opening remarks of the event. She was pleased to note that this year’s passing rate of 56.04% was one of the highest passing rates in several years. She also emphasized that those who got the ten highest scores not only came from the usual universities such as UP, ADMU, DLSU and UST but two placers came from Tarlac State University and Technological University of the Philippines- Manila.

After giving her opening remarks, General Sabong gave her speech and opened it by reconnecting with the successful examinees how it felt like studying for months for an exam that seemingly determined their futures. She then carried on talking about how taking the board exams did not simply halt their careers in the field on chemistry. She exemplified such fact when she went on in achieving an admirable position of being the director of the Philippine National Police Crime Laboratory. She emphasized that being a licensed chemist does not only mean holding a card to prove our excellence in chemistry – it serves to remind us of our higher obligation in serving the country and doing our best to uphold righteousness in society.

Following her speech was the long-awaited march of all successful examinees on the stage to shake the hands of Hon. Adoracion P. Resurrection and Hon. Soledad S. Casteñeda and to finally receive the coveted reward of months of arduous studying: the card dictating one to be a “Licensed Chemist”.

Special recognition was given to the University of the Philippines – Manila for garnering an overall passing rate of 92.31% out of the 43 universities whose graduates took the licensure exams.

After officially inducting the successful examinees into the ICP and the oath taking of the incoming ICP officers, the response was delivered by the top notcher of this year’s Chemistry licensure examinations.

Miguel Francisco de Jesus, hailing from the University of the Philippines- Manila, obtained the highest mark with a score of 92.75%. He emphasized that, with chemistry being a very broad and versatile field of science, chemists could affect more lives and apply their knowledge, not only within the confines of a laboratory, but into the economic and industrial mind-set as well.

Co-hosted by the Chemistry Departments of Xavier University-Ateneo de Cagayan and the Mindanao University of Science and Technology (MUST), the theme; “Chemistry Solutions and Innovations: Collective Multi-Sectoral Endeavors for Mindanao Challenges”was aptly chosen for the event.

The two-day affair was well-attended boasting of 130 chemists and chemistry-professionals in attendance, well above expectations. Attendees included teachers and practitioners not only from the academe but also from the government and industry sectors.

ICP-KKP Regions X/XII/ARMM & CARAGA Chapter takes pride in being the only local chapter of ICP and KKP to hold a regular Regional Chemistry congress. This is already the 16th edition, and is designed to provide a venue where participants from educational institutions, industry, governmental and non-governmental organizations can come together to collectively address local challenges and realities using updated chemical lenses. Such congresses also hope to update the local communities with scientific endeavors and data and establish local collaborations and networks.
More than twenty researches were presented in the fields of Chemistry Education, Materials Chemistry, Analytical Chemistry, Natural Products Chemistry, Process Chemistry, Environmental Chemistry, and Industrial Chemistry.

As a high point to research in the Asia-Pacific region, the Asian Chemical Congress (ACC) held from 19-23 August 2013 at the Resorts World Sentosa, Singapore provide chemists with an opportunity to meet, network and learn what’s trailblazing in their areas of interest. This year, the 15th Congress came full circle and returned to where it was first organized by the Singapore National Institute of Chemistry (SNIC). A contingent of Filipino chemists coming from the Ateneo de Manila University, De La Salle University, Central Bicol State University of Agricultural, DepEd, DOST, Mindanao State University – Iligan Institute of Technology, University of the Philippines Manila and the University of St. La Salle in Bacolod attended the event.

The Conference which attracted approximately 1,650 participants from all over the world had three Nobel Prize winners among the Plenary Speakers: Prof. Aaron Ciechanover, Prof. Akira Suzuki and Prof. Ei-ichi Negishi.

The ACC is a biennial conference hosted by member countries of the Federation of Asian Chemical Societies (FACS) which comprises 30 chemical societies of countries and territories in Asia and the Pacific. The Philippines hosted the ACC way back in 1995. The 2017 ACC will be held in Bangladesh while the 2019 ACC will be in Hokkaido, Japan.

Aside from the plenary talks, special symposia, parallel talks and poster sessions, there were also an Editors’ Forum (Angewandte Chemie, Nature Chemistry, Journal of the American Chemical Society and Green Chemistry), Pioneers from Asia Lectures and the Asian Rising Star Lectures.

ACC participants from the Department of Science & Technology.

The Professional Regulation Commission (PRC) announces that 320 out of 571 passed the Chemist Licensure Examination given by the Board of Chemistry in Manila this September 2013.

The members of the Board of Chemistry are Ms. Adoracion P. Resurreccion, Chairman and Ms. Soledad S. Castañeda, Member.

The results were released in two (2) working days after the last day of examination.

Registration for the issuance of Professional Identification Cards (ID) and Certificates of Registration will be on September 24 – 25, 2013 at the Registration Division. Those who will register are required to bring the following: duly accomplished Oath Form or Panunumpa ng Propesyonal, current Community Tax Certificate (cedula), 1 piece passport size picture (colored with white background and complete nametag), 2 sets of metered documentary stamps and 1 short brown envelope with name and profession and to pay the Initial Registration Fee of P600 and Annual Registration Fee of P450 for 2013-2016. Successful examinees should personally register and sign in the Roster of Registered Professionals.

The date and venue for the oathtaking ceremony of the new successful examinees in the said examination WILL BE ANNOUNCED LATER.

The ICP welcomes its newest cluster composed of chemists in the Philippine National Police Crime Laboratory. The officers of the Philippine Association of Forensic Chemists (PASSFORCHEM) were inducted into office by the Deputy Chief of the PNP for Administration, PDDG Ager P. Ontog, Jr., during the celebration of the 68th PNP Crime Laboratory Founding Anniversary which was held in the PNP multi-Purpose Center, Camp Crame, on June 17, 2013. 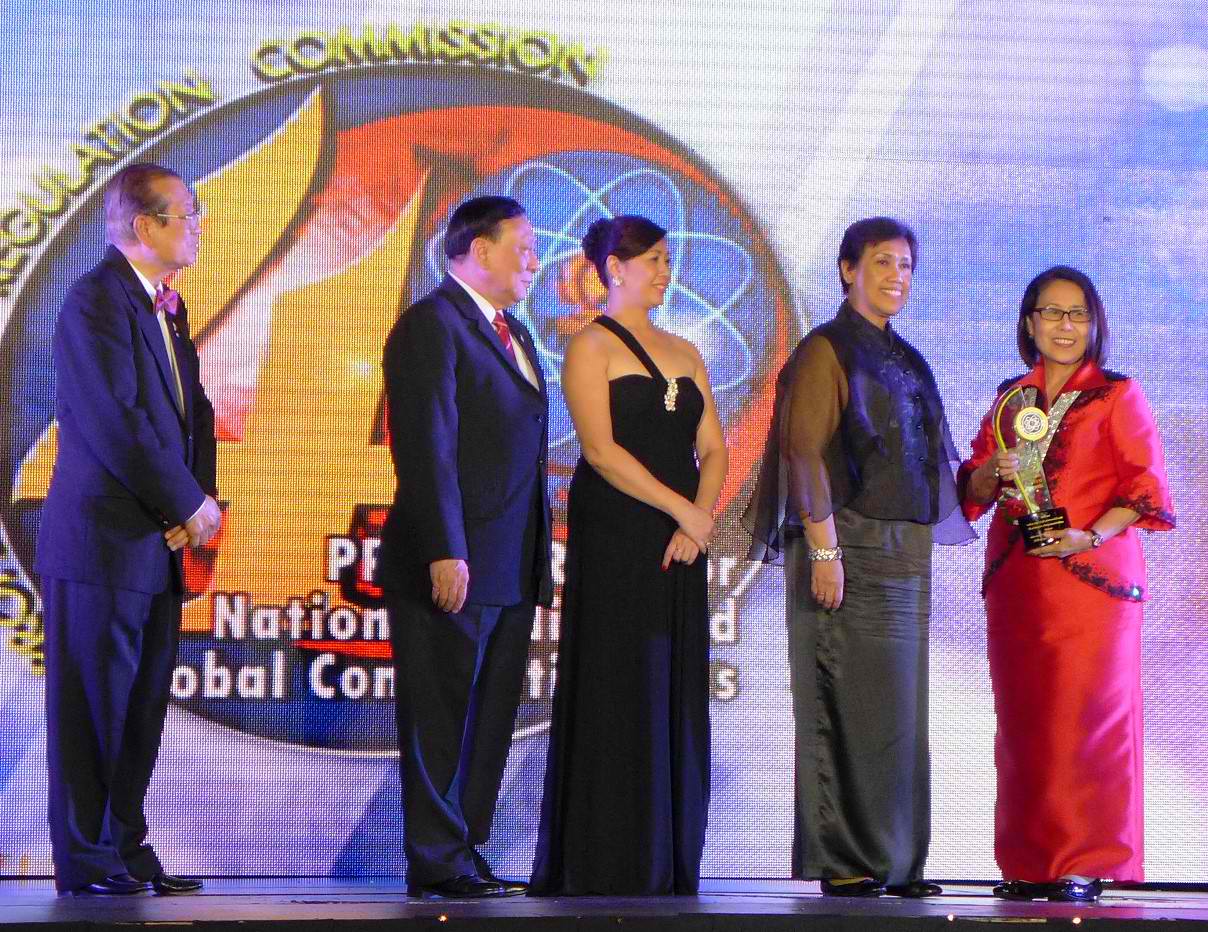 The Outstanding Chemist for 2013 is given to Dr. Amelia Peralta Guevara, Undersecretary, Department of Science and Technology. She obtained her BS, MS, and PhD Chemistry degrees from the University of the Philippines Diliman. She dedicated most of her professional service to U.P. where she rendered outstanding service as a faculty member and researcher. She conducted research in the areas of Natural Products Chemistry and the Chemistry of Mutagens.

Dr. Villaraza was awarded for outstanding scientific and technological contribution entitled “Macro-molecules, dendrimers, and nanomaterials in magnetic resonance imaging: The interplay between size, function, and pharmacokinetics”. He is currently an Associate Professor of the Institute of Chemistry of the University of the Philippines Diliman. He completed his PhD in Chemistry in 2008 at the School of Chemistry of Manchester University, working on the synthesis of heteropolymetallic lanthanide complexes for in vivo biological imaging. He was awarded a Cancer Research Training Fellowship at the National Cancer Institute of the National Institutes of Health in Bethesda, Maryland, USA. In 2010 he received his current faculty appointment at the University of the Philippines Diliman and teaches courses in Introductory and Advanced Inorganic Chemistry. Since 2010, in addition to teaching, he has also spent several months abroad in the Departments of Biology and Pharmacy of the University of Utah working on fluorescent marine snail toxins, and more recently, as a Visiting Academic at Oxford University’s Chemistry Research Laboratory, working on the synthesis of neuroactive bacterial secondary metabolites and their lanthanide conjugates. Dr. Villaraza helps out with the management of the new Nuclear Magnetic Resonance (NMR) facility of UP Diliman, and serves as coordinator for a General Chemistry course. He also co-manages the PMS-ICBG research program, a drug discovery program from marine sources funded by the US NIH-FIRCA.

Dr. Macabeo was awarded Third prize for his work “Stereoselective routes to aryl substituted -butyrolactones and their application towards the synthesis of highly oxidized furanocembranoids”. He initiated his research career back at the University of San Tomas after receiving a doctorate degree from the Institut für Organische Chemie, Universität Regensburg in 2011 under Prof. Dr. Oliver Reiser’s tutelage. His doctoral research focussed on the total synthesis of furanolactone cembranoids. An alumnus of Santo Tomas (BS Chemistry 1999; MS Chemistry 2003), he was awarded various fellowships including the DFG Research Fellowship (March-May 2011), Universität Regensburg and recently, the National Research Foundation (NRF)-Funded Visiting Research Fellowship (Prof. Zhao Yu Research Group), National University of Singapore, last April-June 2012. Those who know Allan describe him as a researcher, foremost, whose interest in naturally derived biologically active compounds brings the discipline of chemistry to answer problems traditionally dealt with by synthetic chemists.

Dr. Manuel Joseph C. Loquias (Mathematics) of the Institute of Mathematics, University of the Philippines-Diliman cited for his work entitled “Coincidence isometries of a shifted square lattice” bagged the Second prize, to round up this year’s winners. The NAST Talent Search for Young Scientists principal aim is to encourage young people to pursue a career in science. This year’s winners were selected from a total of nine competitors from across different academic institutions.

KIMIKA, the Journal of the Philippine Federation of Chemistry Societies, held a three-day writing workshop last 10-12 April as part of the 2013 Philippine Chemistry Congress at the Silliman University Library’s American Studies Resource Center.

The writing workshop was made agreeable that even the most reluctant of writers met the expectations for writing workshop. To date, there have been six completed manuscripts submitted. The Workshop was facilitated by Dr. Drexel Camacho – KIMIKA Editor-in-Chief. It began with a talk on the qualities of manuscripts accepted by Kimika given by Dr. Nina Rojas and Mr. Elliard Roswell Yanza. The participants were then assigned to different mentors for individual guidance.

Plans are currently being made for the 2014 Kimika Writing Workshop as part of the Philippine Chemistry Congress in Naga City, Camarines Sur.

The first week of July will see 35 Nobel Laureates congregate at Lake Constance in Germany to meet the next generation of leading scientists and researchers at the 63rd Lindau Nobel Laureate Meeting. More than 600 young researchers from nearly 80 countries will be part of this special convention – among them Rene Angelo Macahig, a 32-year-old Assistant Professor from the Ateneo de Manila University, Philippines, who is looking forward to the scientific exchange in Lindau: “As a young scientist and a Filipino, it will be an immensely galvanizing experience to be able to participate in the Lindau Meeting, interact with some of the brightest minds in the world and be inspired by a generation of Nobel laureates who have pushed the frontiers of science and expanded our understanding of the universe.”