Dr. Nemesio “Coke” Montaño, professor and researcher at the UP Marine Science Institute, is the Outstanding Chemist for 2012. He was a guest speaker during the Oath-taking and Induction of New Chemists held at the Centennial Hall of the Manila Hotel in October 2012.

END_OF_DOCUMENT_TOKEN_TO_BE_REPLACED

High schools from the region submitted one nominee each for the award.  The criteria consisted of the average grade in Chemistry (60%), participation in Chemistry-related contests, quiz bees, science quests and other related contests (30%), and narrative report of the character and excellence as exemplified by the student to be attested by a Chemistry Teacher (10%).

The event was held back-to-back with the National Children’s  On-the-Spot Poster Making Contest.  Support for the events were given by Chemrez Technologies, Dow Chemical Company, Boysen, Shell, Perkin-Elmer and C&E Publishing.

Awardee (center,Carlo Antonio Nazareno of Colegio de Ignacio) with the ICP SoMin Board of Directors
and ADDU Chemistry Department chair

I am reminding you that FACS is now receiving the recommendations of the possible candidates for the FACS Awards and FACS Citations from member societies. The deadline is extended to March 31, 2013.

I would like to inform you that the Federation of Asian Chemical Society will be presenting the following Awards at the 15th Asian Chemical Congress (15ACC) that will be held in Singapore, from August 20-23, 2013. So far, I have received only one recommendation from Philippine Federation of Chemistry Societies.

END_OF_DOCUMENT_TOKEN_TO_BE_REPLACED 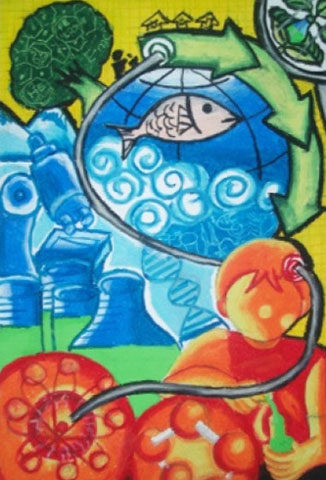 END_OF_DOCUMENT_TOKEN_TO_BE_REPLACED

The Integrated Chemists of the Philippines (ICP) conducted a one-day Basic Training Program on the Globally Harmonized System of Classification and Labelling of Chemicals (GHS) last October 27, 2012, at the Ateneo de Davao University.

END_OF_DOCUMENT_TOKEN_TO_BE_REPLACED

The Junior Chemistry Congress 2012, organized by the Philippine Association of Chemistry Students, Incorporated, was held September 29, 2012 at the Chemrez Room, Institute of Chemistry, National Science Complex, University of the Philippines Diliman.

END_OF_DOCUMENT_TOKEN_TO_BE_REPLACED

It was in 2008 when the ICP held its first seminar on Chemical Laboratory Waste Management. As a result of this seminar, a number of laboratories initiated changes in their chemical waste management practices.  This seminar series have now come full circle and were speakers with the subsequent seminar, entitled “Practical and Cost Effective Solutions to Laboratory Chemical Wastes, part II”, which was held on October 24-25, 2012, at MetroClub, Makati.

Mr. Joel Ballesteros, PCO for UP Diliman Institute of Chemistry, and Ms. Lilia Molina, Head of the Analytical Services Laboratory at IRRI presented their respective programs and insights on chemical waste management. Rounding up the roster of speakers included Engr. Edwin Navaluna, Supervising Environmental Specialist of DENR-EMB and Dr. Veronica Migo, Head of the Central Analytical Services Laboratory of Biotech, UP Los Baños, shared the process for Hazardous Chemical Identification and the relevant laws applying to chemical waste management. Ms. Tess Cayton, former plant Manager for Bayer Crop Science and now a private Environmental Consultant, presented an overview of the best practices on chemical waste disposal as practiced at Bayer (Philippines), to comply with local regulations and national laws, in particular with respect to pesticides. And last but not certainly the least is Dr. Luerne De Sales, General Manager of All Wastes Services, Inc. (formerly Inchem) who presented how chemical wastes are treated in their facilities and Mr. Mark Castillo, an Applications Specialist of Merck Millipore, provided a review of innovations in chemical waste management.

The seminar was concluded with a workshop that involved practice exercises developed by Dr. Fabian Dayrit, on how to identify, estimate and classify chemical wastes based on procedures from laboratory exercises and analytical methods. There were 118 participants representing the government, academe, and industry sectors who were able to acquire valuable information and skills. Many were inspired to start and improve on their lab waste management in their own workplace. With the success of this seminar series,  ICP plans to bring the seminar to the provincial regions in the near future.  (Mutya Samonte)

A walk around the campus, reminiscing and creating new memories at the same time, permeates in that crisp Saturday afternoon last January. The College of Science, in the grand old Main building of University of Santo Tomas, opened its doors to welcome back its sons and daughters to celebrate the Chemistry Department’s 80th Anniversary. It was a delightful opportunity to recognize the accomplishments of the graduates of the Chemistry program during the 80 years since the initiation of the Department of Chemistry’s graduate program. Graduate and undergraduate alumni, current students, and past and current faculty have been invited to the event to share their experiences and their current activities. It was in 1931 since the four-year B.S. in Chemistry program was introduced to respond to the country’s need for more technical experts for which a government recognition was obtained in June 1934 and in July 1961, a B.S. in Industrial Technology was offered.

A short-lived three-year course for chemical technicians was introduced in 1974, and then the five-year curriculum in the mid 1970’s was reorganized and condensed to a four-year program. Dr. Jose I. Del Rosario (AB Ateneo, 1901; MA Chemistry- University of Chicago, 1908; Phar.D.–UST, 1905) headed the department in the post war era when the field of chemistry was undergoing important evolution both in teaching and research. He steered the department towards receiving a citation from the Bureau of Education, as one of the most equipped and competitive departments in the country. The Department is a thriving center for teaching and research at both undergraduate and graduate levels. Its long tradition in excellence made it department in the University to be recognized by the Commission on Higher Education (CHED) as a Center of Excellence (COE) in 1997.

A choice of activities started in the morning with 25th reunion of Class ’86 and a campus tour of the other returning alumni. The afternoon program opens with a solemn mass concelebrated by former rector Rev. Fr. Norberto M. Castillo, O.P. (main celebrant) with former Regents Fr. Pompeyo F. de Mesa, O.P. and Fr. Florencio Testera, O.P. A dinner reception on is followed by a recognition banquet. “We are excited about the return of our many distinguished alumni to help us celebrate this important milestone in the department’s history,” said Department of Chemistry Chair Dr. Bernard Tongol.

Part of the evening program includes the unveiling of the Periodic Table Fundraiser. The fundraising idea was conceived from a series of alumni reunions in the United States from the period 200809, attended chemistry alumni, covering the Class 1963 to 1995. A proposal to provide scholarship funds to Chemistry students and help the Chemistry department through a foundation evolve. The Periodic Table Fundraiser was suggested by Maria Erlinda Co-Sarno (Class 1966/1967) after the reunion. Planning on this endeavor
immediately began in consultation with the Thomasian Chemistry Alumni Association (TCAA) and some key persons from the US-based Thomasian chemistry alumni cluster. Current UST College of Science Dean, Prof. Maribel Nonato remarked, “I know you are also returning to the university carrying the dreams of our financially challenged chemistry students with the formal launching of the noble project “Elements for a Cause: Periodic Table Fundraiser”. A project that will affirm indeed that there is chemistry amongst our alumni and they are strongly bonded! I commend all the people who have worked hard to get this project into shape. We at the administration of the College of Science believe that your initiatives will serve as seed for other alumni to act now and assist the Science students.”

Moving ahead with the experiences of the past 80 years, the Department long-time commitment to develop professionalsthat will occupy positions in the academe, industry, and government and
non-government organizations continues. Four alumni were honored with the following citations;
Ramon Aguillon Llenado, Ph. D.(Class 1967): is recognized for his significant contributions in Analytical Chemistry and their applications in industry, particularly, in the chemistry of detergents,
surfactants, modified silicates and shampoos, as evidenced by his numerous U.S. and foreign patents, research articles, review articles, and book chapters; for the honors and awards granted him by the American Chemical Society, U. S. White House, Soap and Detergent Association, and Chemical Specialties Association; and mostly, for having the highest corporate achievement among Thomasian chemistry alumni in the U.S.A., having risen to the position of Senior Vice-President and Chief Scientific Officer of S.C. Johnson Professional Inc.

Hon. Lucila Peñaflor Payumo (Class 1960): In recognition of her outstanding achievements as Municipal Mayor of Dinalupihan, Bataan, from 1986 to 1995, where she made significant contributions to the national economic recovery program, the restoration of peace and order not only in Dinalupihan, but Bataan in general, thus, meriting recognition from the AFP, and awards as Outstanding Municipal Administrator in 1987, Outstanding Municipal Mayor in 1989, and subsequently, gaining the respect and admiration of other mayors in Bataan by electing her President of the Bataan Mayors’ League.

Maria Erlinda Co Sarno, Esq. (Class 1967): In recognition of her significant contributions in the field of human plasma fractionation, which earned for her patents and technical achievement awards; her genuine commitment to the cause of entrepreneurs in California, as evidenced by her inspiring leadership in the Advisory Council for Small Businesses and Entrepreneurship, thus, enabling the state government to formulate policies leading to an increase in number of small businesses as well as their unqualified success, and earning for her the recognition as Minority Small Business Advocate of the Year 2005, given by the U.S. Small Business Administration, the Lifetime Achievement Award by the Asian Business Association of Orange County, and the Director Emeritus by the Filipino-American Chamber of Commerce of Orange County.

Frederick Aman Villamena, Ph.D. (Class 1990): Presently connected with the Ohio State University, is honored in recognition of his significant contributions in the chemistry of free radicals in biological systems, and in particular, his pioneering research in the field of spin trapping for radical detection and therapeutics, having published in various outstanding chemistry journals, authored book chapters, review articles and patents in the field of free radicals.

The tradition of excellence in instruction, research and student activities continue to permeate in theDepartment’s vision of “performance excellence” which looks ahead confidently to the next
eighty years, recognizing thatlearning from its distinguished past serves as the foundation for an outstanding future. 

More than 200 delegates from 11 regions joined the
three-day Golden Jubilee edition of the PACT National
Convention that started on October 27, 2011. It was an ex-
traordinary celebration as it also coincided with the host Uni-
versity of Santo Tomas’ Quadricentennial Anniversary and
UNESCO’s International Year of Chemistry. Workshops and
lectures covering a wide range of conventional and non-con-
ventional topics were all well-attended and participated in;
matched by UST’s well-equipped facilities. Celebrity musi-
cian Noel Cabangon made a special guest appearance to
show support for chemistry educators by rendering them in-
spirational songs he originally composed. Raffle prizes were
also given to quite a number of delegates, courtesy of gen-
erous sponsors. The event was co-organized by the UST
Chemistry Department and the College of Science.
The themed for this year national convention was “Strength-
ening Bonds, Catalyzing Change: From the Chemistry
Classroom Promoting Public Understanding of Chemistry”
Source: https://www.pinoychemteacher.org/

Institute of Chemistry, UP Diliman
The ANSER program outlines the multi- and interdisciplinary activities aimed at enhancing and advancing national scien tific and engineering expertise on polymers, crystalline and nanostructured materials, as applied to sensor and analytical methods, advanced energy and engineering materials.

There are currently five projects under the ANSER program funded by DOST-PCAS-TRD .This program was developed and directed by IC-UPD, the lead institution, in close collaboration with UPD’s sister university – the Departments of Chemistry and Chemical Engineering, University of Houston (UH), USA. The project proponents are Florian R. del Mundo, Rigoberto C. Advincula, Arnold Guloy. Susan D. Arco, Florentino Sumera, Portia Sabido and Gerry Nuesca. This program was benchmarked from the R&D in advanced polymers and nanomaterias in the US.

Potential and specific outcomes:
-New polymer and hybrid nanomaterials with high specificity and sensitivity for sensor applications.
-Polymers from Philippine coconut oil that can compete economically with conventional fossil-based polymers.
-Training of B.S., M.S., and Ph.D students with world-class skills and knowledge who will emerge as future leaders in the areas of advanced polymers and nanomaterials.
-ISI publications of research findings and intellectual property portfolio development.